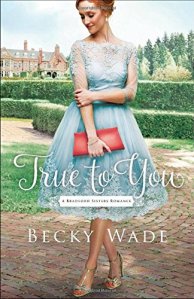 True to You (A Bradford Sisters Romance)

There were things I loved about this book, but some of the content and relationships were too disturbing and I ended up feeling let down. Nora was realistic and faulty, but also someone to sympathize with. Not a cardboard character at all. There were also little comic references to period movie girls, centered on Nora’s fangirl obsession with a British soap opera actor, and the humor about this was gentle, but so, so hilarious. But John was macho and I felt arrogant.  [SPOILER ALERT] His search for his birth mother led into a twist at odds with the light tone of the rest of the book. He learned his mother had been raped by a serial rapist who also raped (and murdered) Nora’s mother—his girlfriend’s mother. So both their mothers were raped by the same man—Nora’s died and John’s became pregnant with him. There was a lot of anxiety over this that almost broke up the couple. This plot left a bad taste in my mouth and even though they are not related biologically, it linked them too closely. It felt weird. So—worth a read, because Wade’s vivid storytelling is really excellent. But definitely not reread.

I was given this book in exchange for my honest review.